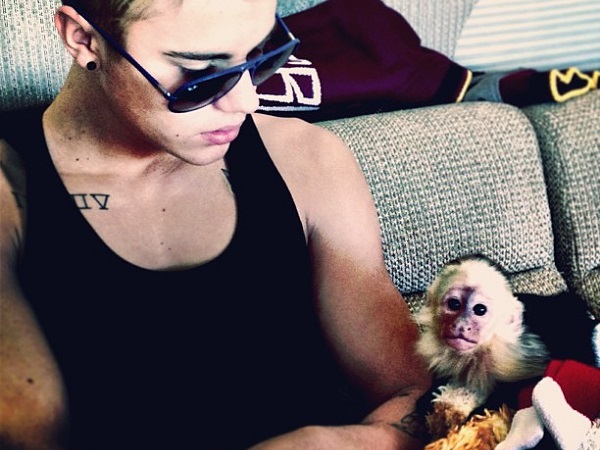 ENOUGH WITH THE MONKEY BUSINESS, BIEBS.  Last week he was accused of battery, and now Justin Bieber is facing charges for forgetting the paperwork to travel with his new capuchin primate pal, Mally.  Poor thing (the monkey…obviously).

http://www.bigleaguekickball.com/about/ Soma without doctor rx The teen dream singer arrived in Germany for his tour on his private jet, but seemed to forget that flying comes with rules.  A LOT of rules.  This is what Thomas Meister, the airport’s spokesman said about the incident:

Justin Bieber brought his monkey to Germany, but had no official paperwork with him…We were forced to confiscate the animal.

Simply stated, but that doesn’t mean it won’t possibly cost Bieber a $15,000 fine.  He left poor Mally quarantined in the Munich airport while he went off to perform, but monkey-sitting isn’t free, no matter how adorable the little fluffball is.  Thankfully, Biebs picked his pet back up on the way home and reassured us that Mally was safe and sound with REALLY, REALLY CUTE pictures on his Instagram.

JUSTIN.  Get your act together!  Society gets peeved when celebrities mess with other people, but when an animal comes into play, the torches come out.  I don’t want to be reporting about Mally in jail in a week’s time.