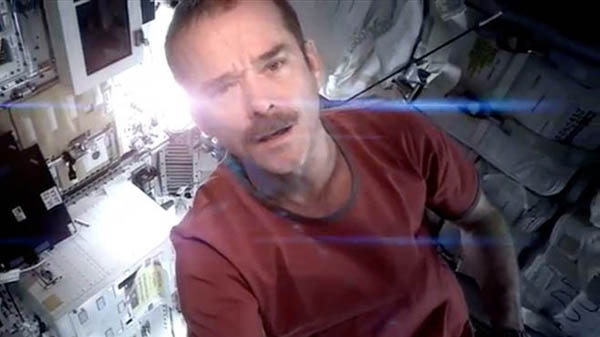 Well, I’ll be damned, ground control has officially heard from Major Tom…and he has the voice of an angel!  Canadian astronaut Chris Hadfield, who is set to return to Earth today after a five month stint at the International Space Station, has released the “first music video made in space,” a breathtaking cover of David Bowie’s 1969 hit, “Space Oddity,” by tweeting out just today:

“A revised version of David Bowie’s Space Oddity, recorded by Commander Chris Hadfield on board the International Space Station.  With thanks to Emm Gryner, Joe Corcoaran, Andrew Tidby and Evan Hadfield for all their hard work.”

The cover is a chill-inducing tribute to a song that left an undeniably wide cultural footprint, and was even recorded with the help of former Bowie bandmate, Emm Gryner, who gushed on her blog:

“The task was in front of me. I came up with a piano part. i then enlisted my friend, producer and fellow Canadian Joe Corcoran to take my piano idea and Chris’ vocal and blow it up into a fully produced song. Drums! mellotrons! fuzz bass! We also incorporated into the track ambient space station noises which Chris had put on his Soundcloud. I was mostly blown away by how pure and earnest Chris’ singing is on this track. Like weightlessness and his voice agreed to agree. And voila! And astronaut sings Space Oddity in space! I was so honoured to be asked to be a part of this. You wouldn’t get too many chances to make a recording like this and not only that, to make music with someone who – through his vibrant communications with kids in schools to his breathtaking photos to his always patient and good-humoured demeanour – has done more for science and space than anyone else this generation. Planet earth IS blue, and there’s nothing left for Chris Hadfield to do. Right. Safe travels home Commander! ”