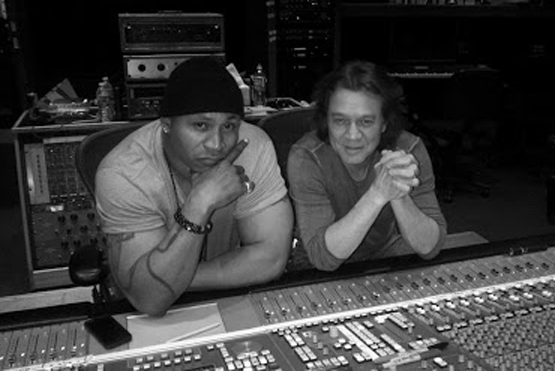 It’s finally here: the long-awaited LL Cool J songs that feature guitar legend Eddie Van Halen AND Fitz and the Tantrums!  The two songs are a glorious combination of classic rock guitar sound and rap, and are an absolute must-hear for fans of both genres of all ages.  While some may be understandably skeptical about the collaboration, LL explained:

“This album was born out of my true love for music and I knew Eddie shared that same vision for authentic music. I approached this song with the upmost respect for Eddie and his fans, and became friends with him through the process. I was humbled to watch a genius at work and collaborate with such a legendary and visionary artist as Eddie Van Halen, and to bring our two worlds together, was an exciting opportunity. I am thrilled he was up for the ride.”

“The thought of me playing guitar to hip hop was definitely left of center, but I was intrigued and I agreed to meet and listen to what he had. I was not only inspired by the songs I heard, but LL’s enthusiasm, his down-to-earth personality, the freedom he gave me to co-create and his willingness to, for the very first time, sing the chorus on ‘We’re the Greatest.’ It was like a breath of fresh air that I needed as an artist and an individual.”

“A breath of fresh air” is right!  You can take a listen to both track below, and let us know: was the collaboration a hit or miss?!