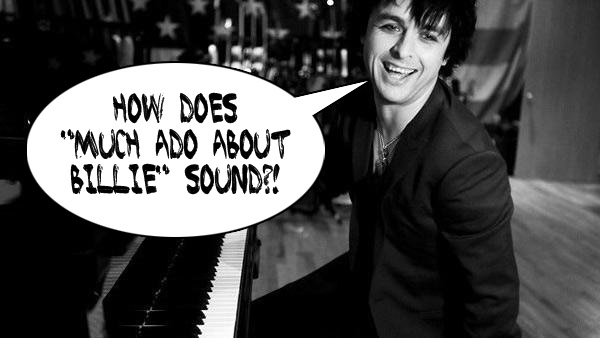 Green Day frontman Billie Joe Armstrong is taking punk back to the Elizabethan era by announcing that he is spending his post-rehab time writing songs for the new modern-day “Much Ado About Nothing” rock-adaptation by the Yale Repertory Theatre.  The play is due to premiere in March of 2014 and follows a band from Liverpool, England as they navigate the music scene.  The play is titled “These Paper Bullets,” and will be directed by Jackson Gay, and is adapted by Pulitzer Prize nominee (for “The Intelligent Design Of Jenny Chow”) Rolin Jones, who has also worked as a television writer for hits such as “Weeds,” “Friday Night Lights,” and “Boardwalk Empire.”

While I have to admit that a couple of months ago I couldn’t imagine this working out, the newly-sober rocker has been doing well recently.  And hey – he impressed countless with the “American Idiot” Musical, so I have high hopes for a punk rock Shakespeare!  Can’t wait to see how it all turns out!